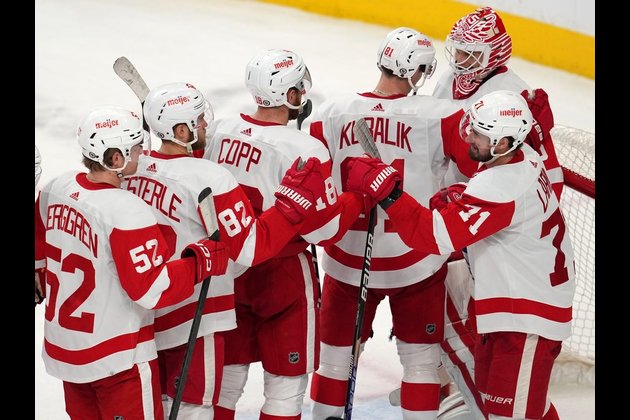 Wings, Flyers meet as both clubs cling to playoff hopes

The Detroit Red Wings snapped a three-game losing streak on Thursday but couldn't exhale until the final buzzer.

They'll look to build off that game, and perhaps make it less dramatic, when they host the Philadelphia Flyers on Saturday night.

Detroit claimed a 3-2 road win at Vegas to end itsskid. The Red Wings scored two second-period goals to take a 3-1 lead. The Golden Knights scored with 43 seconds left and continued to pressure the net before time expired.

The Red Wings went 1-1-1 on their three-game road trip, losing at Colorado 6-3 and Arizona 4-3 in a shootout. The Red Wings also had a 3-1 third-period lead against the Coyotes but couldn't hold it.

"We've had some ups and downs, we've had some tough emotional losses, so to fight back and get a win here (in Vegas), it ended up a fairly good road trip," Red Wings coach Derek Lalonde said in a postgame TV interview.

Detroit got off to a good start as Dylan Larkin set up Lucas Raymond for the first goal less than three minutes into the contest.

Domanik Kubalik scored on a power play early in the second period and Joe Veleno cushioned the lead by scoring midway through the period. Veleno ended a personal 10-game goalless streak.

"It feels great in here after a win," Veleno said. "We really wanted this one bad. I think the boys earned it. We worked hard (Thursday) and we didn't take any time off. We hung in there and battled right to the end."

The Red Wings helped their cause by not taking any penalties.

"We were good from start to finish and we got a result," Lalonde said. "Something like this will certainly build some confidence."

The Red Wings will be facing the Flyers for the first time in their three-game season series, and both teams are trying desperately to stay in the Eastern Conference playoff picture. Detroit entered Friday's play sixth in the Atlantic Division. The Flyers are seventh of eight teams in the Metropolitan Division.

Philadelphia is coming off a 4-1 home loss to Chicago on Thursday.

"I just thought we looked flat and disjointed," coach John Tortorella said. "It's one of those games. I didn't like much about it at all."

Chicago took a two-goal lead early in the third period and added an empty-netter for the final margin.

"I just never felt comfortable in the game as far as the amount of forechecking we needed to do," Tortorella said.

Philadelphia scored the only goal of the first period, Morgan Frost's 10th of the season off a feed by Nick Seeler.

"I've been told to shoot the puck a little more, so that's what I did there," Frost said.

The Flyers had won eight of their previous 10 games before Thursday's outing. Philadelphia will be playing the front end of a back-to-back. It will host Winnipeg on Sunday.