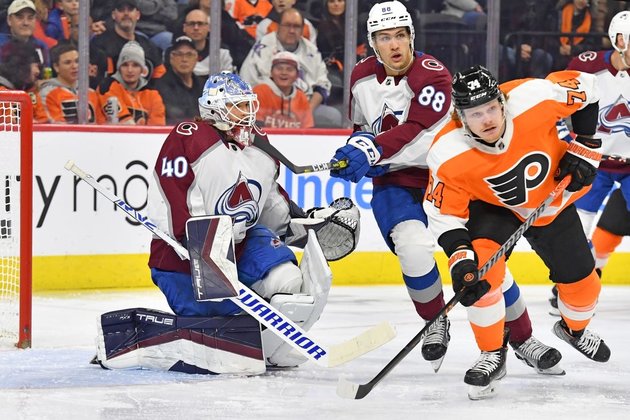 Travis Sanheim had one goal and one assist while four teammates scored a goal apiece as the host Philadelphia Flyers earned a rare win Monday, winning 5-3 over the Colorado Avalanche -- who lost leading scorer Nathan MacKinnon to injury.

Alex Newhook scored two goals and Mikko Rantanen added one for the depleted Avalanche, who were already playing without the likes of Artturi Lehkonen, Valeri Nichushkin, Evan Rodrigues, Darren Helm and Gabriel Landeskog.

MacKinnon assisted on Newhook's first goal to open the scoring at 3:50 of the first period, as Newhook redirected a shot on the power play which eluded Hart.

The Flyers tied the game at 1 when Sanheim flicked a wrist shot to the top corner of the net at 7:29. The shot appeared to deflect off Newhook.

MacKinnon left the ice with eight minutes remaining in the first period and was not seen on the bench at the beginning of the second. The injury appeared to occur when he blocked a shot by Scott Laughton at 11:47 of the first.

Philadelphia took a 2-1 advantage at 18:05 of the first after Laczynski corralled a rebound and scored. Joel Farabee took the initial shot, which bounced off Georgiev's pads.

Alex Galchenyuk was whistled for holding and the Flyers capitalized with a power-play goal by DeAngelo at 3:59 of the second for a 3-1 lead.

Colorado had a solid scoring chance when Martin Kaut broke free and tried to score on the backhand at 15:31 of the second, but Hart sprawled to the ice and made a stellar save.

Cale Makar skated in all alone at 7:30 of the third but was stymied by Hart.

Tippett connected on the power play at 9:54 for a 4-1 advantage.

Rantanen skated through two Flyers and scored at 17:47 to close within 4-2. Newhook then scored 36 seconds later and the deficit was sliced to one.

Konecny connected on an empty net with 59.3 seconds left to secure the win.