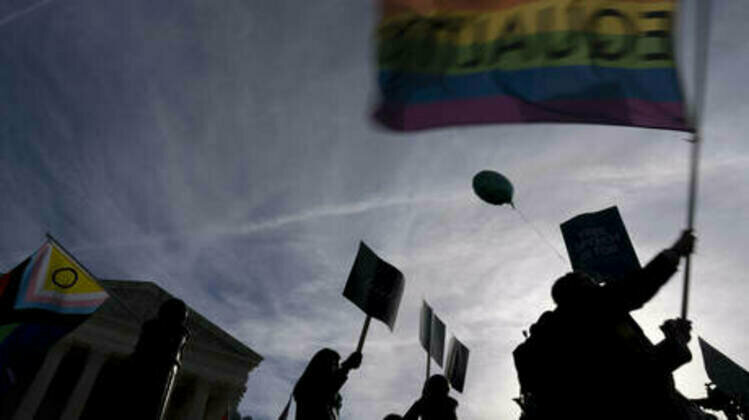 The US Supreme Court is hearing the case of a Christian web designer from Colorado who claims it's her constitutional right not to work on projects promoting same-sex marriage. The ruling could finally determine whether civil rights law trumps Americans' right to free speech.

The case, heard on Monday, began several years ago when web designer Lorie Smith sought to offer her customers bespoke wedding-related websites and graphics, according to a brief filed by her lawyers.

The brief noted that while Smith "will work with clients regardless of race, creed, sexual orientation, or gender," she is a devout Christian and will refuse commissions that clash with her religious beliefs. She wrote a message on her website explaining that she would only create custom sites celebrating heterosexual marriage, as to do otherwise would "tell a story about marriage that contradicts God's true story of marriage."

Under Colorado's 2015 Anti-Discrimination Act, Smith was forbidden from posting this message, prompting her to sue the state in 2016. Her lawyers argue that the state law violated her right to free speech and free exercise of religion, both of which are protected by the First Amendment of the US Constitution.

As such, a ruling in favor of Smith could lead to similar anti-discrimination laws being struck down in future cases. The court's nine justices have agreed to rule on whether "applying a public-accommodation law to compel an artist to speak or stay silent violates the free speech clause of the First Amendment."

At the core of the case is what constitutes speech. An appeals court has already decided that Smith's work is technically "speech," but ruled against her regardless, declaring that artists offer such an exclusive set of skills that the state has an interest in compelling them to serve everyone.

In a similar case in 2018, the Supreme Court sided with Christian baker Jack Phillips, from Colorado, who refused to bake a cake celebrating a gay wedding. While the court found that the Colorado Civil Rights Commission acted with "hostility" toward Phillips' religious beliefs, it did not issue a ruling on whether cake decoration constitutes "speech," as Phillips argued, or on the specific circumstances under which people may seek exemption from anti-discrimination laws.